Back when I started collecting Irish Whiskey, that makes it sound like it was 40 years ago…. I’ll start again…. Back in September, after I purchased the first bottle of Irish Whiskey for my collection, a 15 Year Old Powers Single Cask, bottled for the Celtic Whiskey Store, I was informed leaving the shop ‘That bottle is part of a collection of single cask releases by Powers’…

After getting home that day I started to research this series of Powers SC and discovered a few others online but couldn’t find all the info I needed. It was time to pop in to the very knowledgeable guys at Mulligans on Clarendon Street, and in particular Mark, who is an absolute fountain of knowledge, to dig a little deeper and find out what’s what. He gave me a breakdown of where Powers were with all the releases and in no uncertain terms explained that I was going to be playing serious catch up and a lot of these bottles had been out for some time. After going through what the collection consisted of I realised that some would be harder to get than others, some would be more expensive than others and one might be next to impossible to get and would cost a fair few Euro!

The one was the 75th Dublin Airport Anniversary Edition, Powers Single Cask, Cask No. 83785. 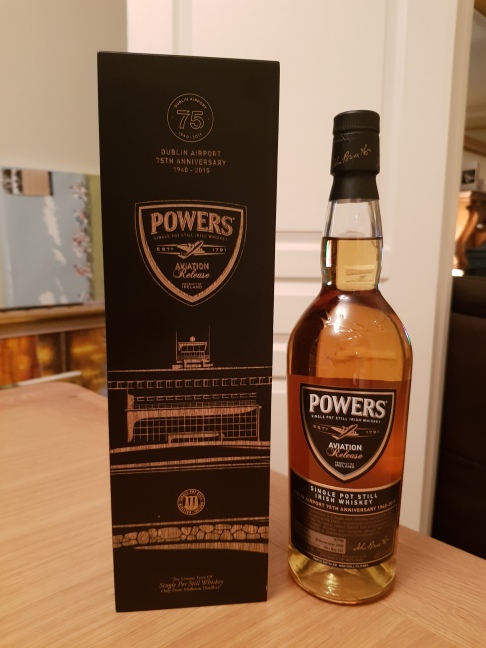 I had sat down with my very understanding and some what worried wife and explained that if I embark on this mission to complete this series, a time will come when I’ll more than likely have to hand over, give or take, €400-€500 for a particular bottle. Needless to say, the look I got wasn’t overly encouraging but it wasn’t a no either.

I set off on my mission and over time started to pick away at quite a few of the collection and it began to dawn on me that I might just pull this off. Thoughts at this point turned to Cask No. 83785. There was no real point in getting the rest of the collection and stopping there. In the words of Magnus Magnusson…. ‘I’ve started, so I’ll finish’

Is it really going to cost that sort of money? Where will I find one? Will all my efforts in collecting the series have been in vain? Surely no one will sell one, they’ll all hold onto them, I thought. Maybe Mark is wrong and it won’t cost that? (Mark was not wrong….lesson learned).
So, back in December I was on an Irish Whiskey Buy, Sell, Swap and Seek page and I was flicking through the many adds where people were advertising various bottles of Dingle Whiskey and asking for the Holy Grail in return. Nestled amongst all these crusaders was a post by a Mr W (code name of course, might not want name on this blog) advertising Cask No. 83785 for sale…. Sheer panic set in as I fumbled with the phone, trying to type, ‘PM Sent’ before anyone else could, hoping that this would give me some sort of first refusal on the bottle. I thought about playing hardball, I thought about offering way below asking and chancing my arm, I thought about offering a mystical bottle of Dingle……In the end I went in €50 below asking and sat there like a kid who’d asked a girl out and waited for the reply. Please say Yes!!!

Some polite messages were exchanged and then we got down to the finer details. In discussing my collection and my need for Cask No. 83785 I mentioned that I was going to be travelling up to Belfast in the coming weeks in order to pick up the bottle released for the fantastic premises that is, the Friend at Hand. It was suggested that we could do a different sort of deal other than cash and I said I was willing to listen. Mr W was after the Friend at Hand Redbreast Single Cask but was struggling to get up to Belfast and feared he’d miss out. Between us we worked out that the thing to do was for me to buy this Redbreast and do an exchange for Cask No. 83785. We agreed there was a slight price difference but we’d work that out and no one would out of pocket.

Thursday of last week, my wife and I packed the two kids into the car and hit the road to Belfast. It was 175km each way and at the end of the first leg we arrived in CastleCourt shopping centre and off we went looking for the Friend at Hand. Now, we went via a kids shop (I had to throw some sort of olive branch out there) and enquired about buying a new buggy, but alas, they had sold the last two they had the day before and it wasn’t to be! I had carried out enquires with the Friend at Hand a few days previous and was confident that my bottles were in stock. My wife and kids headed off to give me some time on my own in the Friend at Hand and I could have spent all day in there chatting with Ray and looking thru the collection but time was against me so I managed an hour and half, made my purchases and set off again to find the family. We set off on the 175km journey back home and I was happy as Larry, as they say. I’d added my Friend at Hand Powers Single Cask to my collection and I’d picked up the Redbreast for Mr W. I was one step closer to getting my hands on Cask No. 83785.

I do realise that I brushed past the whole Friend at Hand experience just there but that’s another blog in itself!

Mr W had mentioned that there was no rush in doing the actual swap and he was happy once he knew I’d bought the Redbreast and we’d meet up some day soon and do the exchange but there was an itch that I just couldn’t scratch. It was a mixture of wanting to get my hands on 83785 and also it was on my mind that the Redbreast wasn’t really for me I’d a lot of money tied up in it. I got it into my head that I was going to be burgled and they’d only take the Redbreast, the one that isn’t really mine.

So I suggested to Mr W that I was willing to head on down to the sunny South East in order to complete the deal and do the handover. We arranged for this to happen on Friday of this week. Gorey was set as the meeting place and off I went on the 105km each way journey to do the handover.

I got there a little early and sent a text to Mr W saying ‘I’m in the bar, I’m the one with the Redbreast on the table’. In he came and in his hand was 83785. My Holy Grail…. We sat down and chatted and exchanged stories and bottles. The deal had been done and I was one major step closer to completing my Powers collection.

By way of saying thanks for all the effort that had been put in to making this deal happen Mr W included a bottle of 12 Year Old Powers Special Reserve which was a really nice touch, not required really but I’ve learned that in this game of collecting there are some really decent people out there and turns out Mr W is definitely one of them!

I hit the road again after our brief meeting with my two bottles of Powers and completed my 105km return trip back to Clonee with my 75th Dublin Airport Anniversary Edition, Powers Single Cask, Cask No. 83785 in hand and a smile across my face.

I’d driven 550km’s for one bottle of Irish Whiskey!